The Agriculture sector continues to play a central role in Pakistan’s economy. It is the second largest sector, accounting for over 21 percent of GDP, and remains by far the largest employer, absorbing 45 percent of the country’s total labour force. Nearly 62 percent of the country’s population resides in rural areas, and is directly or indirectly linked with agriculture for their livelihood. The Agriculture sector’s strong linkages with the rest of the economy are not fully captured in the statistics. While on the one hand, the sector is a primary supplier of raw materials to downstream industry, contributing substantially to Pakistan’s exports, on the other, it is a large market for industrial products such as fertilizer, pesticides, tractors and agricultural implements.Despite its critical importance to growth, exports, incomes, and food security, the Agriculture sector has been suffering from secular decline.

Over the past six years, Agriculture has grown at an average rate of 3.7 percent per annum. However, volatility in the sector is high, with the range of growth varying between 6.5 percent and 1.0 percent.The fluctuation in overall agriculture has been largely dependent on the contribution of major crops. During the outgoing year 2009‐10, the overall performance of agriculture sector has been weaker than target. Against a target of 3.8 percent, and previous year’s performance of 4.0 percent, agriculture is estimated to have grown by 2.0 percent. Major crops, accounting for 32.8 percent of agricultural value added, registered a negative growth of 0.2 percent as against robust growth of 7.3 percent last year. Minor crops contributing 11.1 percent to overall agriculture posted negative growth of 1.2 percent. Production of Minor crops has declined for the three years since 2004‐05, a worrying trend which is partially contributing to food price inflation.

Improved high‐quality seed or planting material is the most desirable input for improving crop yield. Seed is an important component in agriculture productivity system. Seed has the basic position among various agricultural inputs because the effectiveness of all other inputs mainly depends on the potential of seeds. Seed is a high technology product and is an innovation most readily adapted. Improving access to good quality seed is a critical requirement for sustainable agricultural growth and food security. Effective use of improved seed can result in higher agricultural production and increase net incomes of farming families, which has a positive impact on rural poverty. Hence, availability of quality seed of improved varieties is essential to achieve the production target.

A demographic change towards urbanization reduces the size of rural workforce, agriculture will also need to adopt new forms of mechanization and shift to land use intensification, with all of its connotations. High agricultural production assures food security and agriculture surpluses for export at competitive prices require efficient development and utilization of agricultural resources. Cost effectiveness in the production of various crops brings built‐in competitive edge to low productivity attributed farmers. Farm operations being time specific, demand precision to optimize the efficiency of agricultural input for higher productivity. The future changes of free market economy and faster globalization have further necessitated modernization of agricultural machinery through transfer of latest, efficient and cost effective technologies to the farming community. Efficient use of scarce agriculture resources and accelerated agricultural mechanization are, therefore, vital to meet the challenges of future scenario that need a comprehensive strategic loaning for future.

Livestock plays an important role in the economy of the country. Livestock sector contributed approximately 53.2 percent of the agriculture value added and 11.4 percent to national GDP during 2009‐10.While other development sector experienced saturation and decline there has been an increase in livestock sector in 2009‐10. Gross value addition of livestock at current factor cost has increased from Rs. 1304.6 billion (2008‐09) to Rs. 1537.5 billion (2009‐10) showing an increase of 17.8 percent as compared to previous year.

The performance of Livestock – the single largest contributor to overall agriculture (53.2 percent) however, grew by 4.1 percent in 2009‐10 as against 3.5 percent last year.
The Fishery sector expanded by 1.4 percent, against its previous year’s growth of 2.3 percent. 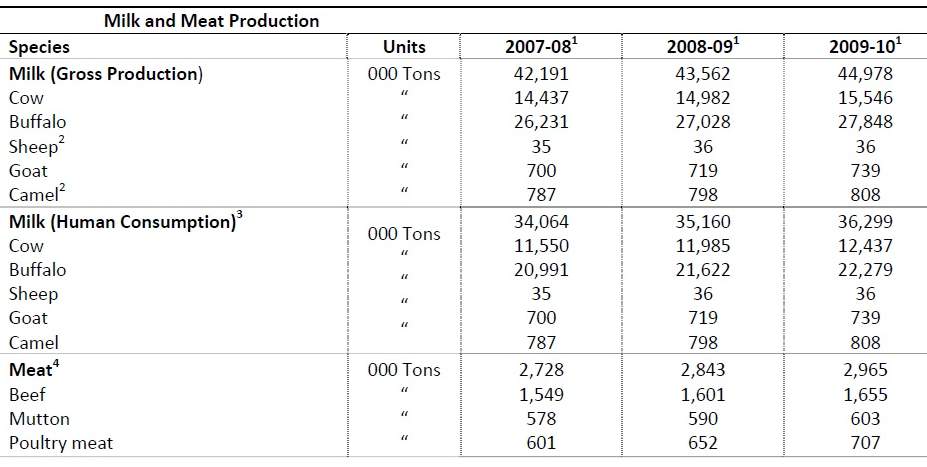 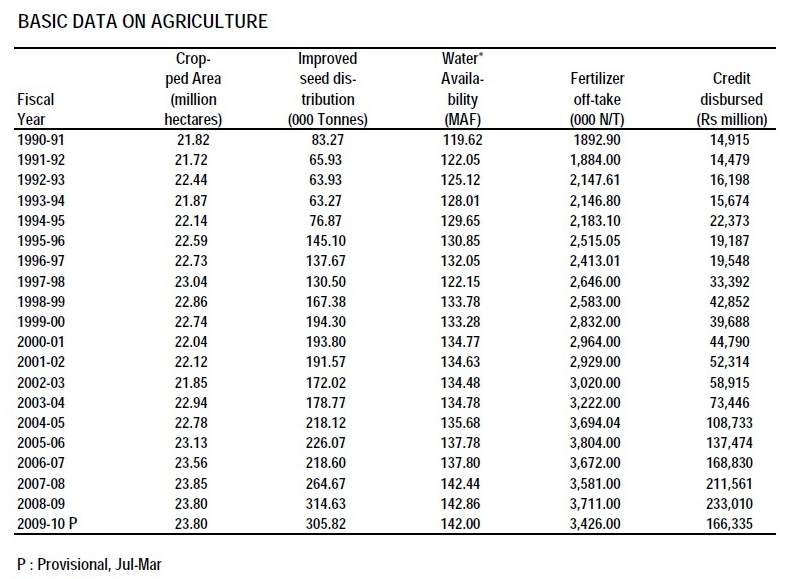 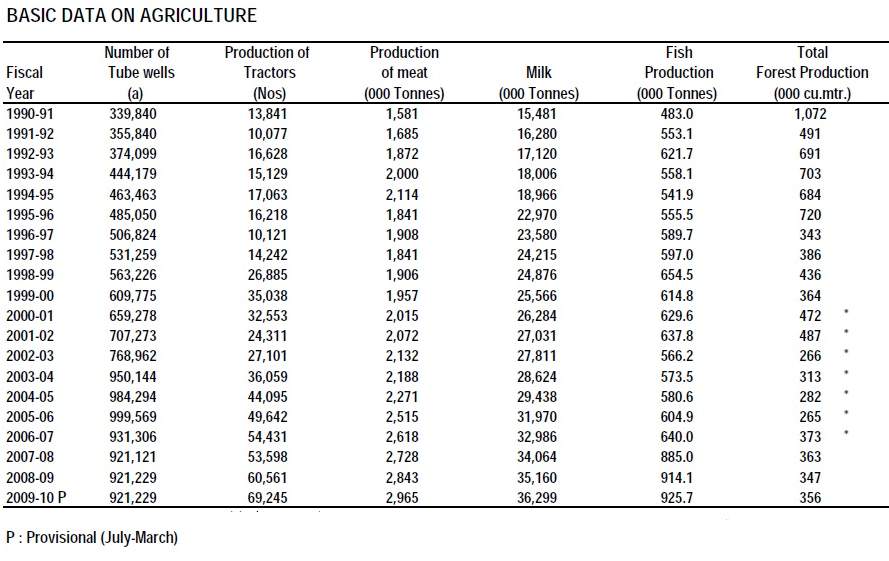 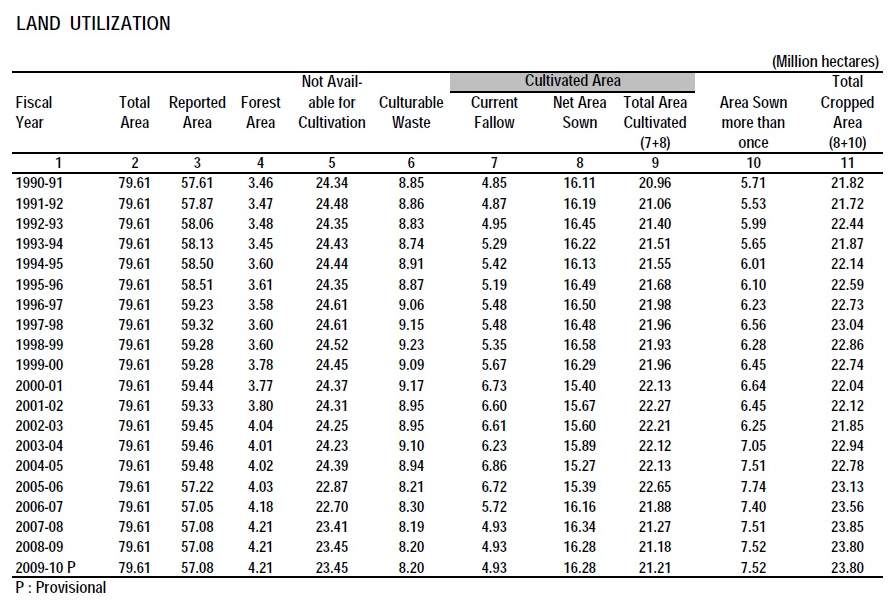 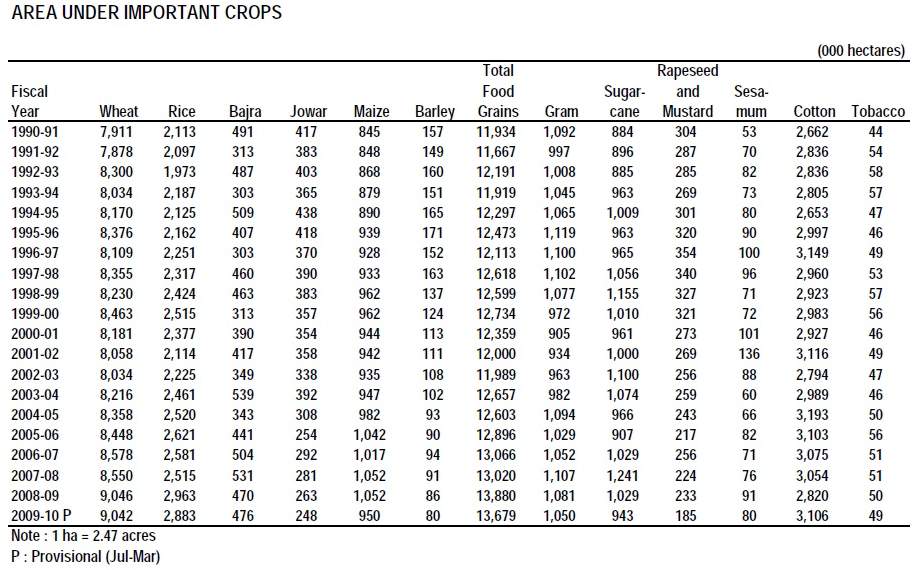 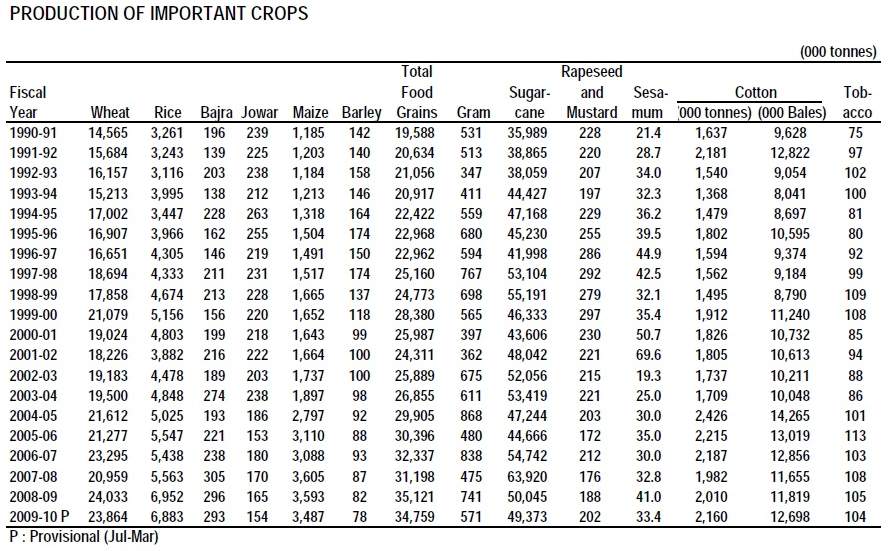 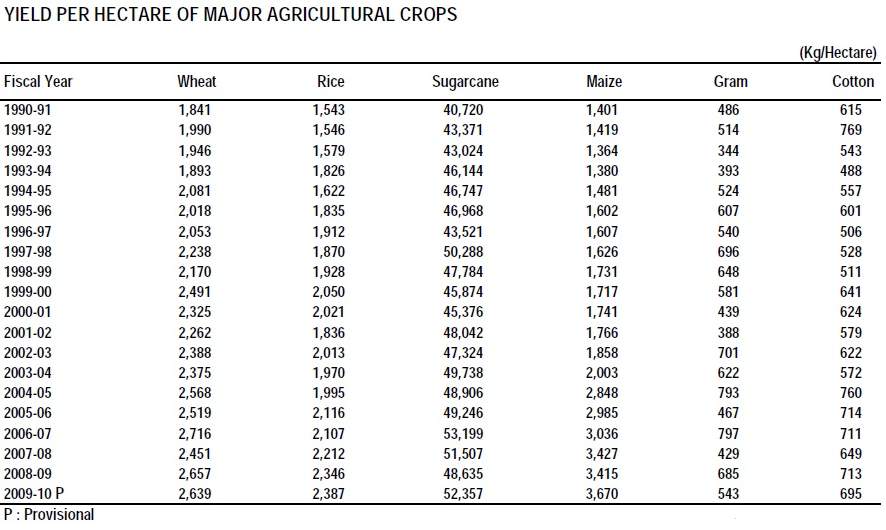 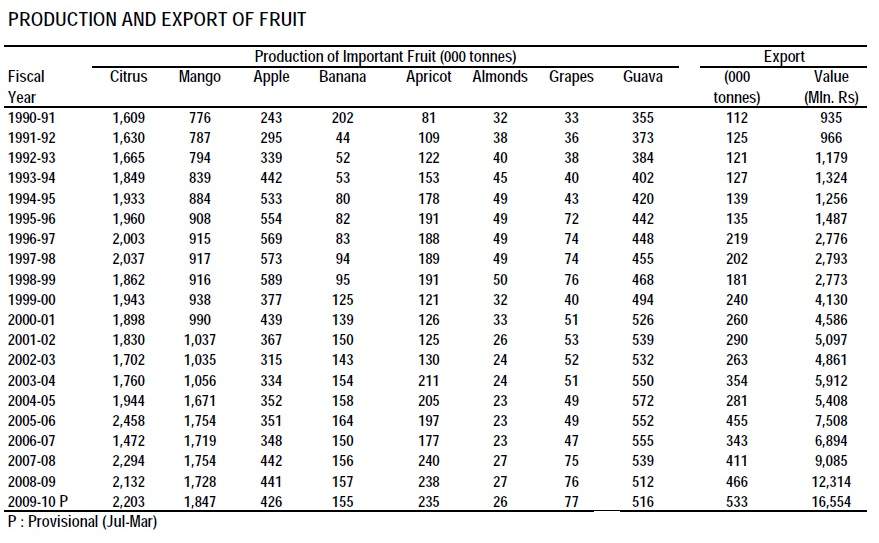 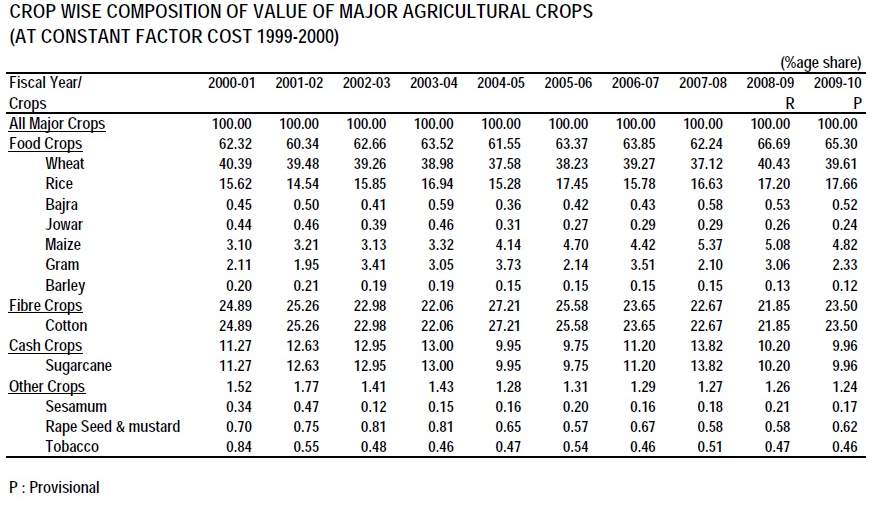 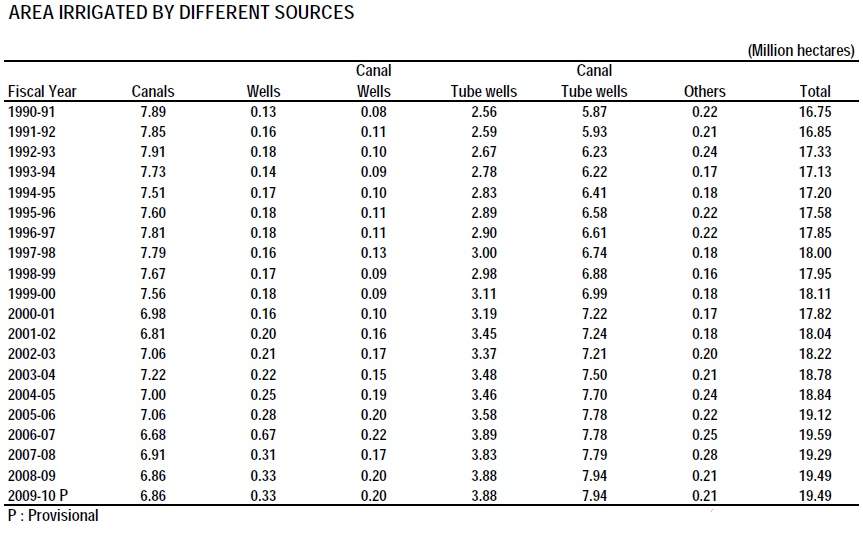 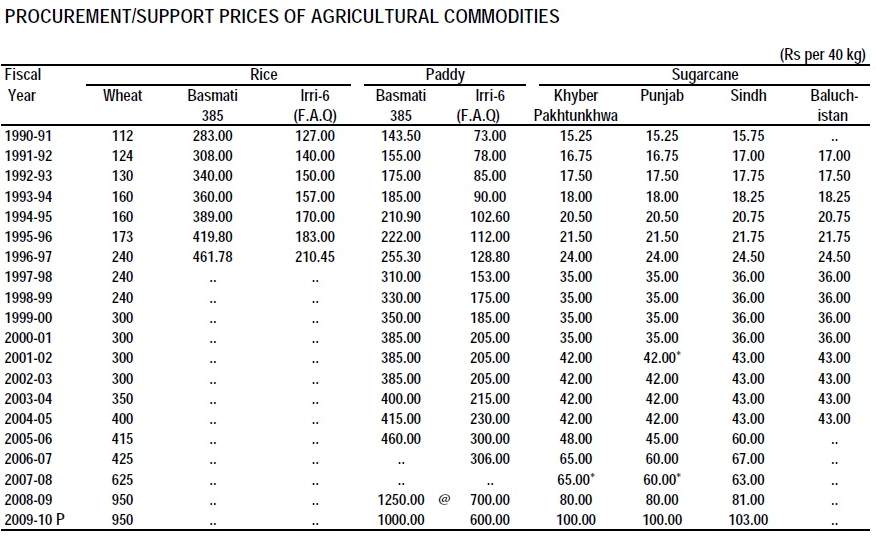 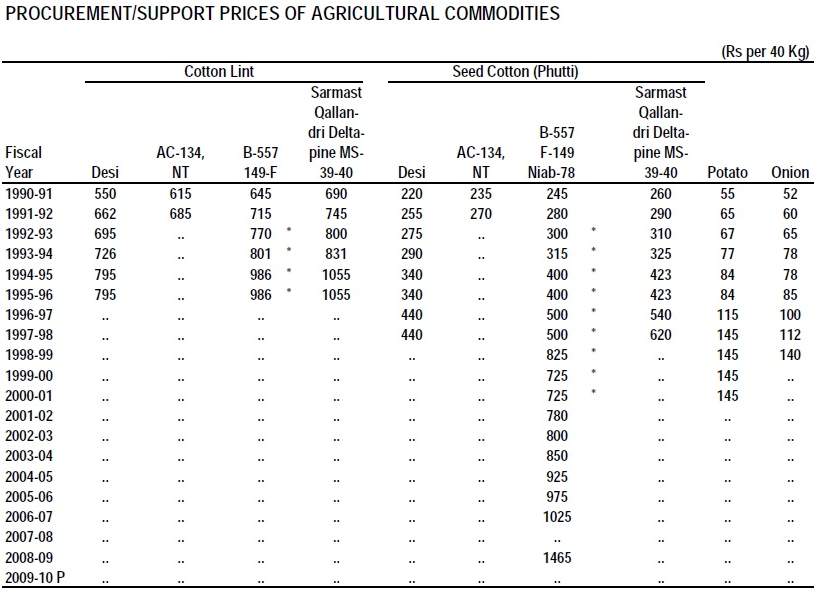 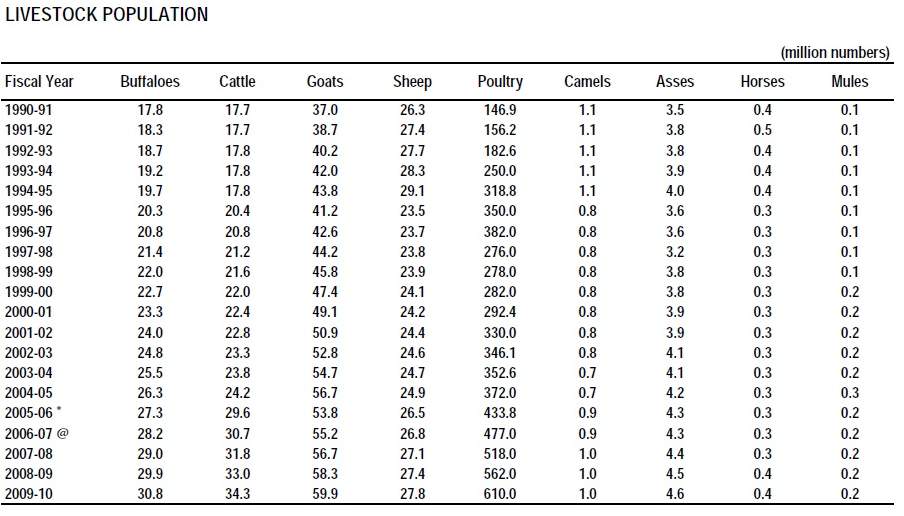 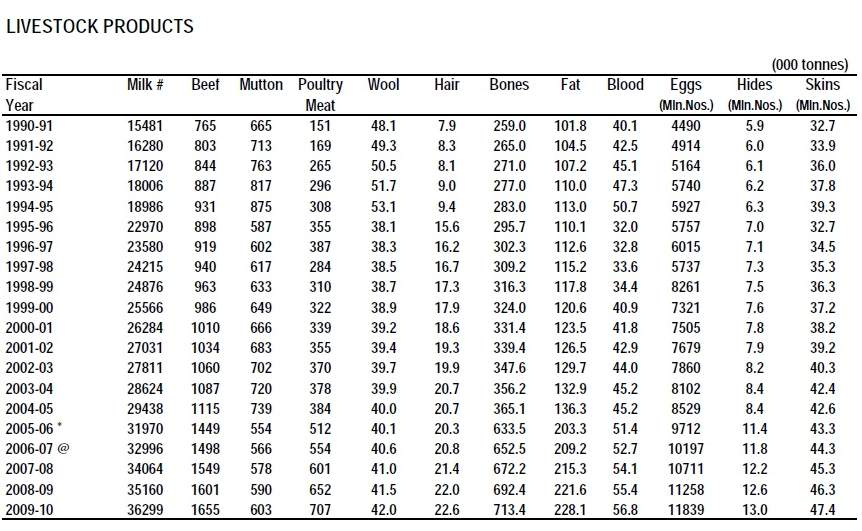